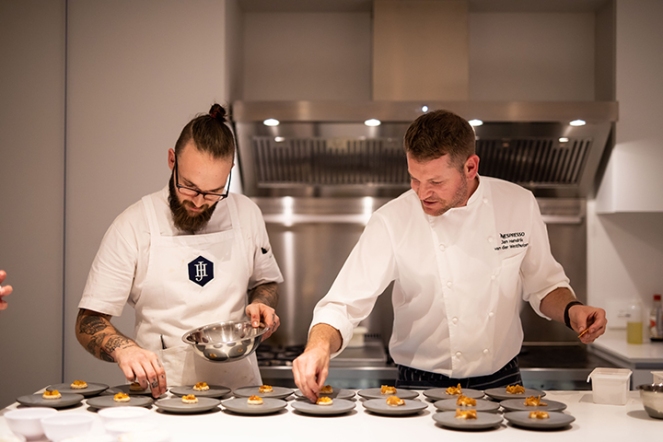 The JAN Innovation Studio is one of the most inspirational spaces you will ever enter. This is where fine dining meets creativity in a myriad of forms – wine, books, antiques, flowers, art – all as stylish as South Africa’s first Michelin Star chef himself, Jan Hendrik van der Westhuizen. Last week, a select group of 18 guests gathered to spend an evening with Jan and his Innovation Studio team for an exclusive Nespresso-inspired event. Among the guests were über-glamourous celebrity BFFs Jo-Ann Strauss and Jeannie D, and Instagram influencers like The Joburg Foodie, Steve Steinfeld.

The inspiration for the menu was coffee; in particular, the new Barista Creations range from top Swiss brand Nespresso. Specifically formulated to be enjoyed with milk, the three new flavours – Chiaro, Scuro and Corto – are inspired by the baristas of the coffee capitals of the world: Brooklyn (New York), Melbourne (Australia) and Barcelona (Spain). The evening started on a high (in more ways than one) when guests were served three signature coffee-infused cocktails alongside mouth-watering canapés. First up, a deeply aromatic wild mushroom, Cape brandy and burnt thyme cappuccino kept the conversation flowing while bites of an intriguing, striped savoury trifle – which comprised layers of savoury Boerenkaas custard, chicken-liver parfait and sherry jelly – were served in antique silver dessert spoons.

The second cocktail was a subtle combination of Mount Bay rum and Nespresso’s Chiaro espresso with a hint of honey – it is as if I were drinking in the scents of a fynbos forest.  The delicate noisette brioche topped with smoked snoek pâté, apricot jam and deep-fried sage was also a hit, but the star of the canapés was a lamington made with the spicy Corto espresso and smothered in fine biltong with a hint of Marmite – this is a classic JAN creation in its reflection of both contemporary and South African heritage elements.

“Coffee is like wine,” said Jan. “It’s [like] a grand cru – you need to know more about it to understand it. The more you try it, the stronger your palate becomes and the more your library builds up with information. It’s not a matter of trying it once and deciding you don’t like it.” 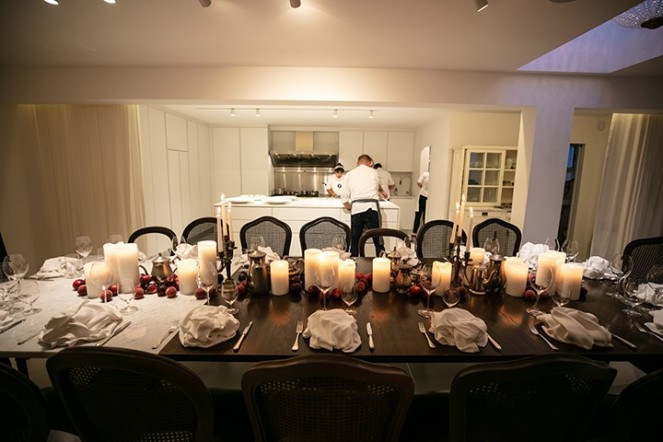 After this insightful first look at the Barista Creations range, we were seated at a long table with a parallel view over the open kitchen where Jan and his team were hard at work. There was a frisson of excitement among the guests when a beautiful entrée was placed before us, decorated with curls of green and pink apple. A mound of frozen green apple was topped with a delicate crown of Tête de Moine cheese – like a creamy carnation – nestled in a bright gold, glazed soup bowl with an oversized white porcelain rim, the effect of which was pure magic. Jan came around to each guest bearing a 1970s gilded coffee pot from which he poured a delicious smoked haddock café au lait. Flavoured with smoky chorizo and the Scuro espresso, it combined perfectly with the fresh buttery spring vegetables at the bottom of the bowl. The combination of the tart apple, the creamy delicate cheese and the smoky haddock was like a surprising reimagining of all the comforting memories of childhood. 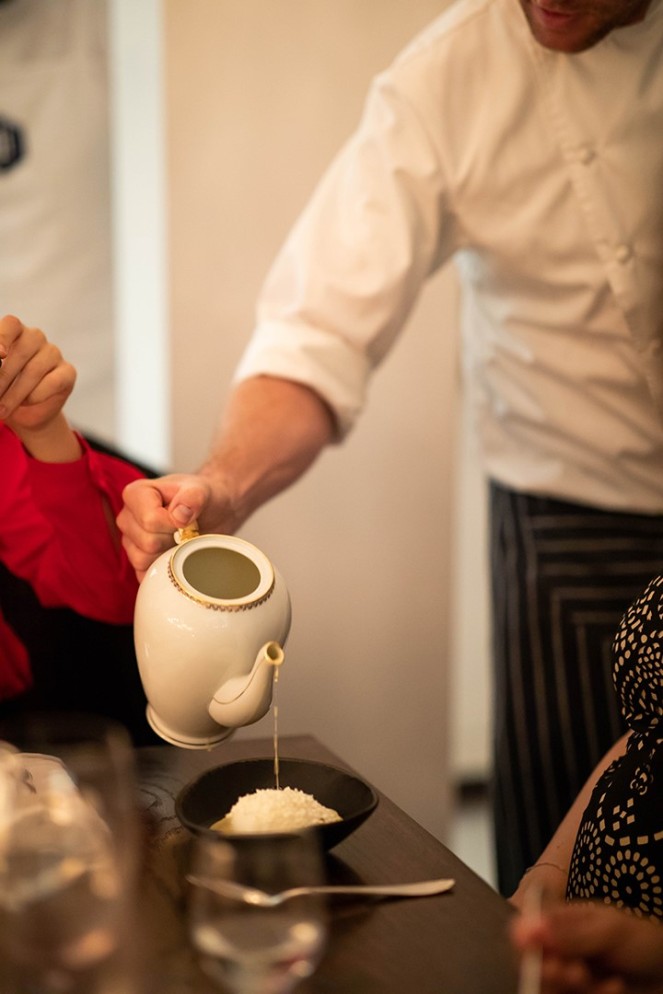 “I’m not only focused on tastes,” said Jan. “The visual effect can also bring different connections to me. It’s a new way of thinking about food: you break barriers this way – you don’t only use your palate, which is used to so many things, it opens up a whole new approach of combining different elements.”

The entrée was served with the limited edition Jan Cuvée Blanc (a blend of chenin and barrel-fermented sauvignon blanc) which was made in partnership with the organic winery Org de Rac in the Swartland.

Jan was privileged to be one of only eight chefs from across the globe to attend the Nespresso Chefs’ Academy in Switzerland earlier this year. Making friends and drinking Cognac late into the night, Jan said it was a fascinating experience to learn about “the nitty gritty of coffee, tasting green coffee before it’s roasted, and finding new ways to cook with it”. He started experimenting with the Barista Creations’ flavour palette about two months ago, creating subtle ways to pair and contrast the coffees with unexpected flavours.  A ristretto fan, he usually drinks his coffee black served in a vintage cup, but admits that he is “a bit of a sucker for caramel coffee, which is a little off the purist track, but just as satisfying”.

According to Jan, that what makes his collaboration with Nespresso so important is centred around the key concepts of sustainability and consistency. Calling it a “Swiss precision machine”, he started serving Nespresso at his Nice-based restaurant, JAN, six years ago and hasn’t looked back since. He said that most of the Michelin-Star restaurants in France serve Nespresso because the quality and flavour can’t be beaten. Nespresso is also super-fast to serve compared to unwieldy lever machines that can take up too much space.

The second course was the brainchild of the Innovations Studio head chef, Michael Jonker, who previously plied his trade as head chef at Foliage in Franschhoek. As a vegetarian, Michael was keen to experiment with celebrating the bitter flavours of coffee paired with similar astringent ingredients. He created a scintillating salad of griddled cos lettuce served with ruby grapefruit and bitter greens topped with chickpea sprouts which had been germinated in a mixture of compost and coffee grounds.  This was finished off with an outstanding citrus beurre blanc and balsamic pearls. 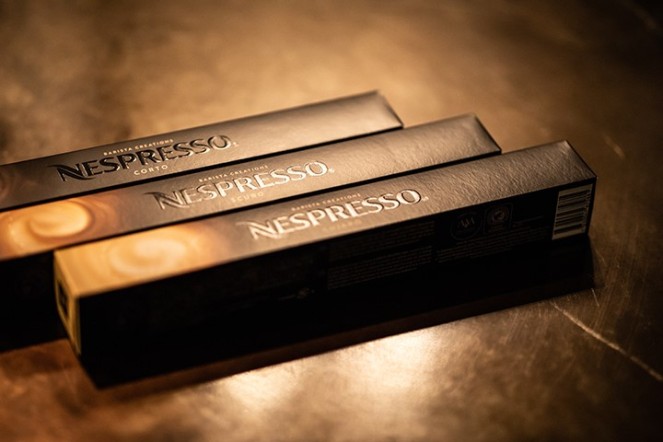 Stuart Brown, CEO of Nespresso’s distributor in South Africa, introduced the guests to the new range, stating that, like coffee drinkers in the UK and Australia, over 70% of South Africans love milk-based coffee. And apparently they love recycling, too! Stuart emphasised that since opening the Nespresso flagship store at Cape Town’s V&A Waterfront in 2000, thousands of people have returned their used pods for recycling and resmeltering. What’s more, unlike all the other pod-based machines on the market – which use plastic pods – the Nespresso lids and pods are made from aluminium which is completely recyclable.

The star of the main course was an excellent kudu loin all the way from the Kalahari. Jan’s connection to this fascinating region will be celebrated with the launch of his new restaurant, KLEIN JAN, next year. This will be his first restaurant to open its doors in South Africa in a very special venue – a private game reserve owned by the Oppenheimer family. The venison was served with dreamy bone-marrow mashed potatoes and broccolini with a red wine and tonka-bean jus flavoured with the spicy Scuro espresso. As soft as butter, the meat had been cured for six hours in salt and brown sugar and then lightly seared with rosemary. The hand-made crockery it was served in was also remarkable, etched with the grasses and sand of the Kalahari like a palimpsest.

We then proceeded to the library where the cheese course was served. This was a highlight of the evening as it felt as if we were visiting Jan in his home. Surrounded by the chef’s growing collection of heritage cookery books, the table was bedecked like a still life by a Dutch master – an array of sumptuous cheeses from France arranged among a riot of flowers and vine leaves. Accompanying the cheeses was Jan’s signature mosbolletjie bread, Medjool dates and nuts. In this, the pièce de résistance was the Époisses de Bourgogne from Burgundy – a soft cheese served with grapes that had been macerated in the Scuro espresso, giving the fruit a rich intensity.

We then returned to the long table for an absolute dream of a dessert – the best way to describe it would be joy on a plate. Simplicity personified, it looked like a perfect white chrysanthemum with petals of meringue Ideal Milk snowflakes. Underneath was hidden a pillowy cloud of steamed egg white (like a hybrid between Swiss meringue and floating islands) with sliced strawberries and cubes of sweet wine and espresso jelly. We waited, hearts aflutter, for the coffee pot to come around again. And when it did, our dessert was doused in the lightest, richest crème anglaise you will ever taste. Flavoured with cardamom and fynbos honey, and made with amasi yoghurt and the Chiaro espresso, this custardy chai latte brought the whole dish together. Like Pavlova meets jelly and custard but with the volume turned right up, the espresso struck a bright, clear top note among the blend of fabulous floral flavours.  This unforgettable dessert was served with the perfect accompaniment to balance the sweetness, a flute of dry Graham Beck Cuvée Brut as pink – and as perfect – as a spring blossom.

What an unforgettable experience.

You can join Jan and his team at the JAN Innovation Studio at 87 Kloof Street, Cape Town, on selected days. Simply sign up for their newsletter at www.janhendrik.com for more info. This exclusive opportunity is available for two nights per month with 14 guests per night.

This article first appeared on FOOD AND HOME ENTERTAINING ONLINE http://www.foodandhome.co.za in October 2019. All PHOTOS by NESPRESSO SOUTH AFRICA.