I love how some books take a long time to find you. Ever since seeing the Peter Greenaway film The Pillow Book in 1996 it has remained as entrancing as the first time I saw it. Then, as you watch the credits roll right till the end, you discover that it’s inspired by an actual text- The Pillow Book of Sei Shōnagon.

Sei was a courtesan living in 15th century Japan and her journal (which she kept in a hidden inside her wooden neck rest, or pillow) is one of only two texts that survive from this era. I recently found the Penguin edition in my favourite charity bookshop and it felt like something had come full circle.

Sei Shōnagon was an extraordinary person, her life of relative isolation made her shallow at times but she also made a many acute observations of the people around her, both in and out of court. She strove for beauty, from her love seeing of violet and white robes worn together, to the particular satisfaction of writing a poem with ink and brush that could resonate and be appreciated by the recipient. I especially love her sometimes short but always inspiring lists, which was the main inspiration for the film, which- be warned- is only loosely inspired by, not based on the text. 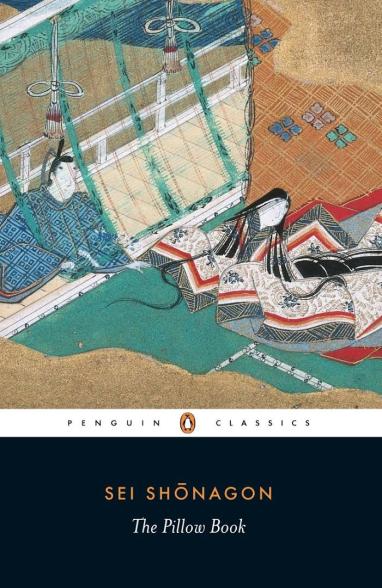 I am always intrigued by Japanese symbolism, which I know very little about apart from a few random examples I looked up when researching some antique porcelain. Much like the Victorians and their symbolism for flowers denoting different human virtues, when you see a delicate spray of wisteria embroidered onto an antique silk kimono, it symbolises long-life and immortality.  The abundance of the wisteria’s flowering vine also signifies our own expanding consciousness.

In fifteenth century Japan the year was divided into different months that echoed the sowing, planting, sprouting, harvesting times of the agricultural year. The time for sprouting rice was in early Spring, what was known as the Fifth Month. Even though she loved surprises, Sei Shōnagon was always aware of what was appropriate during each month, right down from who should visit whom, to what clothes one is expected to wear. I would love to be seated at the table during Rice Sprouting month with her to dine on the simple and lovely rice dishes they must have eaten!

The best rice I have ever eaten was short grain sticky rice in an authentic Thai restaurant. The grownups had ordered a lot of dishes full of fresh chilli, which my childish palate couldn’t handle, so I was relieved when a whole roasted sweet and sour fish arrived at the table. After hours of waiting, I was richly rewarded with a bowl full of the most fragrant and flavoursome rice I have ever encountered.

And so my love affair with rice continues unabated. However, there does seem to some confusion about how to cook rice. A Xhosa friend of mine once said “Oh, I am craving rice for supper tonight but I’m too lazy to cook it…” “But rice is so quick and easy to make!” I replied. She then explained a complicated version of rinsing, steaming and cooking that made me dizzy. I thought of her when I read the instructions on the side of my packet of rice. I beg of you, never do this. The measurements and cooking times are horribly, horribly wrong. This is my tried and trusted way of How to cook rice:

Allow one cup of rice for two people. I only use basmati or jasmine rice. Avoid Tastic rice at all costs. I call it plastic Tastic.

Pour your rice into a medium-sized pot. Rinse the rice in cold running water at least twice and up to five times, depending on how sticky you like it. Fill the pot so that you have as much twice as much water as there is rice (one part rice to two parts water). Add half a teaspoon of salt. I prefer using coarse or fine Himalayan salt.

Place on the hob over high heat and bring to a boil. Place the lid of the pot at an angle so it doesn’t boil over. After 5 minutes or so, lower the heat and put the lid back on. Do not stir. Cook until the rice starts to pop but do not allow it to burn. As soon as it starts popping, switch it off. DO NOT lift the lid.

Steam for 8-10 minutes. The steaming in the pot is the secret to fluffy rice.

The method for cooking brown rice is exactly the same except that it takes 10 minutes longer.

Of course, there are many involved rice dishes that do require precise care and timing. The Persian or Iranian way of cooking rice involves butter that makes a marvellous brown crust at the bottom of the pot. And then there’s our home grown marvel: breyani. Whole spices, meat, potatoes and rice are layered in a big pot and steamed at low temperature for hours. It is a dish of kings and looks like a dream when you turn it out onto a large silver platter for a wedding feast so that the brown crispy bits can tempt all who gaze upon it. Like all rice dishes, it needs to be left to its own devices.

But I am too lazy for all that right now. As I write this, a pernicious heat wave has swept through most of the country so all we crave is lots of liquids and simple and light dishes at the end of the day. Here is a recipe for jewelled golden pilaf. Serve as is or with a simple baked chicken and a cooling beetroot raita, which is my favourite way of eating beetroot.

2 sticks of cinnamon or cassia bark

Fry the flaked almonds in butter until golden brown. Set aside.

Pour the rice into a large non-stick pot or saucepan. Rinse and add the water (as instructed above). Add the cinnamon stick, naartjie peel, cardomom pods, salt and saffron. Bring to a boil and cook for 10 minutes before turning the heat down to medium.

Stir the chopped apricots, sugar and butter into the rice with a wooden spoon. Shake the pot so the rice is level. Put the lid on the pot and place under very low heat. Steam until light and fluffy.

Serve with the golden almonds sprinkled on top and the chopped coriander (if desired).

Drain and allow to cool slightly before peeling and chopping into cubes. Put the cubes into a bowl with a lid.

Mince a small clove of garlic into a small bowl. Add a cup of full cream Greek yoghurt.