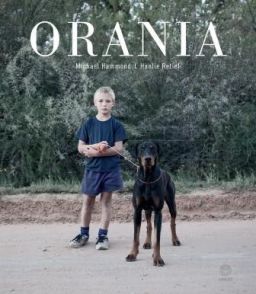 Mere mention of the word ‘Orania’ conjures up images of militant Afrikaners of pro-Nazi proportions, intent on separating themselves from the so-called new South Africa.

But this is not what journalists Michael Hammond and Hanlie Retief discovered at all. Instead they found a devoted community of mostly working class Afrikaners, peopled by a host of colourful characters eager to share why they love living there.

Orania was launched at Kalk Bay Books on Tuesday evening and captures a village frozen in time with the town’s 1960s, face-brick architecture strangely symbolic of the Afrikaner’s pioneer spirit. Celebrated journalist Hanlie Retief is an award-winning  author of the biography Byleveld as well as writing a weekly interview column in Rapport. Michael Hammond has taken photographs for Die Burger, Rapport, Beeld and Volksblad with special interests in documentary photography and visual anthropology.

By intentionally removing themselves from the political aspects of the ‘volkstaat’ of Orania, the two set out to document its residents objectively, without condoning the inherent racism of why the town was founded. “One can’t be totally neutral, “ says Retief, “but in realising how the stories contradict each other, it is up to the reader to have a clearer picture of what life is like in Orania and make up their own minds.”

“This is not only a book of portraits, the stories are essential. You can see so much in the visual details ‒ but a picture can only say so much, the rest is either your experience or your imagination. Through her stories, her accounts of these people’s lives, Hanlie opens the door and tells you what is on the other side,” Hammond describes.

The idea for the project came up in conversation one day when Hammond mentioned to Retief that he noticed that no books have been published about the town or its residents. In wondering how closed off from the world it really was, they decided to investigate, embarking upon an adventure with “no preconceived ideas”. Hammond made a foray on his own at first, camping out in a tent in the caravan park and spending a few weeks getting to know the residents. Juggling her busy schedule, Retief joined him when she could, where they visited some of the residents together or returned to the places where Hammond had taken photos.

These stories include meeting the enigmatic horse whisperer, Gabriel, who was photographed next to his beloved horses wearing a waistcoat he made from a springbok skin. Another vignette depicts a mother watching her young daughter play in the street, a table laid out with birthday treats; showing the poverty and sadness amid the celebration. Having big dreams for her daughter, she says: “I know quite well that you can’t do anything without money.” Oom Oskar sits on his stoep next to a giant, gilded plaster copy of the Oscar statue. He says: “In Orania if you’re looking for someone you throw a pebble on their roof” and phones his neighbour Franz every morning to say “I’m alive and well, so let’s face the day.”

One story which perfectly illustrates the inherent contradictions of living in isolation  from the rest of South Africa took place at a recent rugby match between the local all-white team (Die Rebelle) and a coloured team from nearby Hopetown. Prior to the match there was some media coverage and tensions ran high, especially after the Orania team lost. But afterwards, when the two teams were relaxing outside the local cafe, standing a distance away from each other, the captain Johan Cloete called the coloured guys over to share a beer with his team around the fire. Michael pointed out that around half of the town’s residents don’t support their team because they play against ‘non-whites’ but the other half see rugby as unifying factor.

Located on the border of the Free State and the Northern Cape, Orania is managed by a co-operative with some shares owned by residents. Dr Karl Boshoff, an ardent admirer of Dr Hendrik Verwoerd, bought the land from the department of waterworks in 1992 for R1.5 million. The population of the town numbers at 1000, which remains fairly stable as people come and go. Incidentally, over 400 residents  reportedly voted at last week’s election. A number of Afrikaners have invested in property there, with the intention of eventually retiring there. There is also a healthy influx from tourists from over the world, including Germany. Michael noted that the middle class is small, with a small group of wealthy residents and the majority being relatively poor, which makes the future of the town uncertain.

Hanlie describes it as “a community divided against itself” despite some almost idyllic elements and being practically crime-free. One resident even broke his car keys because he never took then out of the ignition. As Kalk Bay books staff member succinctly put it: “This book is a sensitive portrayal of how this place exists in this moment… to be preserved for posterity.”

A selection of photographs from the book is currently on exhibition at Youngblood Arts and Culture development at the Beautiful Life building in Bree Street. Copies are available from Kalk Bay Books.

2 thoughts on “The other side of Orania”