It is a complete rarity to find unpasteurised milk in this world. I was lucky to stumble across a small shop that sells local raw milk in the small Karoo town of Graaff-Reinet. The Karoo is a mythical place. Encompassing a vast area of semi-arid landscape dotted with ant-hills and thorn trees, is known for its cloudless skies, extreme temperatures and fossils, some of which have been recently discovered to be whole new species that have never been seen before. A primarily agrarian area, the Karoo is known for rearing sheep for mutton, goats for mohair and game. In prehistoric times it was a vast inland sea and, prior to colonialisation the 1700s, it was the home of indigenous peoples, the Nama and Khoi-San (formerly known as Bushmen). In fact, the last time I was there I read a fascinating article about how some of their almost extinct languages are being brought back to life through a series of workshops organised by the Pan South African Language Board (Pansalb). And thus, I digress!

The reason I was excited about finding whole, raw milk is to make my own ricotta. As important as pasteurisation is to the health of humankind, it has killed the nature (and a great deal of the nutrients) of the milk we drink. Homogenisation in particular, born out of ignorance and squeamishness about the layer of cream that floats on top of milk (much like the skin on custard when it cools) has resulted in milk that has lost its character.  I believe that unpasteurised milk is safe to drink. The only time I would avoid it is if you are pregnant or if you don’t know where it comes from. If it’s fresh and local, there is nothing quite like it.

When I was growing up, a local dairy used to deliver milk, cream and yoghurt directly to our door every morning. This was delivered to us by Barry, an old hippie guy with a ZZ Top style beard. He drove a Volkswagen van and played bass guitar in a blues band. It was marvellous to scoop off the thin, rich layer of yellow cream that had risen to the top. When I visited my dad and stepmom on their farm, I enjoyed milk fresh from the cow every morning. I even once tried to milk a cow like Heidi (but didn’t succeed). What I could do is pour the milk into a separator that used centrifugal force to separate the heavier cream from the lighter milk. We used an old wooden butter churn to make butter, I kid you not, and butter paddles that gave the round little butter balls a texture similar to cross hatching. All of this makes it sound like I grew up in the 1950s but this was the way many people lived on the farms of South Africa for decades, right up to the 1990s. Nowadays with industrial farming, dairy farmers have a hard time of it, with so many regulations and quotas to fill, they send their milk to a central point where it’s pasteurised, homogenised and bottled. It is so strange to think that all this has changed so much. Now we need educational programmes to inform our children where milk comes from.

I was amazed at how easy it is to make my fresh ricotta. Here’s how.

You will need a large ceramic or glass bowl, a mesh sieve, at least half a metre of clean, wet cheesecloth, two teaspoons salt, 3 tablespoons of white spirit vinegar or of lemon juice.

Pour two litres of full cream, unpasteurised milk into a pot. Add salt and place over medium heat. Add the salt and stir to dissolve. Do not allow to boil. When it is warm but not boiling, take off the heat and stir in the lemon juice or vinegar. Using a wooden spatula, gently gather the curds that are forming to the middle of the pot. Leave uncovered to cool and coagulate for 15 minutes. Line the sieve with the cheesecloth in one layer, so that you can fold the rest of it over the cheese. Balance the sieve over the bowl and pour the curds and whey into the sieve. Gather the cheesecloth together so the curds form a ball. You can leave the cheese like this for up to six hours. Remove from the cloth and either roll into little balls and marinade in flavoured oil or keep the cheese whole in a large jar filled with brine. You can use the left over whey in a recipe for home baked bread, omitting the salt. This is what my ricotta looks like: 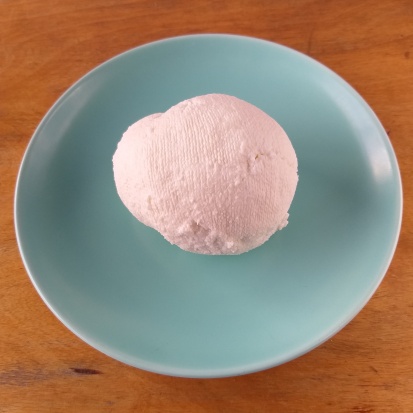 I made two batches and experimented with using both vinegar and lemon juice. Lemon juice resulted in a looser cheese, so it was much easier to roll it into little bite-sized balls.  I ended up rolling half a batch in pounded fennel seed and black pepper and the other half in smoked paprika dressed with lemon scented olive oil. This is how it turned out:

The first most obvious choice for using your homemade ricotta is to mash it up with cream cheese, fresh garlic and herbs. Add lots of steamed and chopped spinach and stuff the mixture into cannelloni tubes. Make a rich, fresh tomato sauce and pour it over the tubes, sprinkle with parmesan and bake for 40 minutes. But the easiest way to enjoy your ricotta it just as it is, with freshly baked ciabatta, vine tomatoes and olives.

4 thoughts on “Curds and whey”